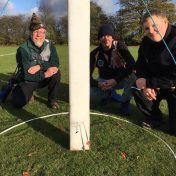 Members of the club travelled to Hertford to participate in the 2016 Heidi Blewett Memorial Shoot. The ‘competition’ is very relaxed and prizes are awarded for things such as soggiest scorecard and most blacks shot during the round rather than the top score. Rounds shot were in the St. George… Read more »

Royston Heath’s Jack Corps was selected for the Hertfordshire County Team that shot at the 2016 SCAS Intercounties Competition in Oxford on the 10th of September. The shoot was contested under a constant downpour which only cleared up during the last few ends. Congratulations Jack on your selection. A report from the event… Read more »

Royston Heath had an archer participate in the 1440 round at the Penicuik Pick N’ Mix weekend in Edinburgh this weekend. Results can be found here.

Three members of the Club travelled to our neighbours in Hinxworth for their annual invitational. It was a windy day however some good scores were shot by those in attendance. Full Results can be found here.